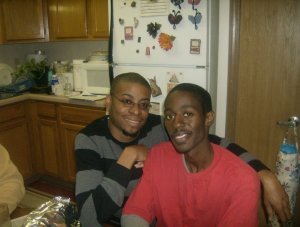 Now I don’t do this much but today is a special case in my heart. In my own words.

Today my cousin Lamont Williams would have been 30 today. He was my friend and definitely my brother from another mother.

Exactly 4 months from this date, it will be 4 years that he left this earth.

One of the best things about him was his skills in basketball. He loved the game and wanted to be the best. I remember playing him in the backyard where at first he was a rebounder. He was like Dennis Rodman. He didn’t do a lot of scoring when we played team ball but he would fight and “grab that board.” As he got older, his skills got better. When we were in middle school, I would beat him in the backyard. When we got to high school, he destroyed me. His game was so much better than mine; so much better that he made the varsity team at Lindbergh. I was so proud of him making the squad. I was even more proud of him when he made the local paper. Basketball was his thing, whether playing it or discussing it…he loved it and he lived it. That basketball was everywhere with him. I can remember his favorite team was the Los Angeles Lakers and he told me that he was hurt back in 2008 (when they lost to Boston) and happy for them in 2009.

In the summer of 2010, I seen him in the hospital…and I didn’t like seeing him there…but he was watching the NBA Finals between the Lakers and Boston. He was so hoping for the Lakers to get their revenge on Boston. If you saw the series, they did. It was one of the final times he would catch a basketball game as his illness got worse.

It was so weird seeing him in this fashion. How could a young man who (in my opinion) could do no wrong, go through such an illness? He didn’t deserve it, his wife didn’t, his family didn’t either. WHY HIM? I would say. I’m not saying my cousin was perfect but he did what he could to keep from being into trouble. He was on the verge of doing good things such as being a talented musician. Along from his basketball, he loved making beats. He was working hard on them. When I started doing radio, he was going to do my music for the show. It never came to pass, as work got in the way and his illness literally slowed him down.

On December 3rd, 2010, he breathed his last breath, and he closed his eyes and never opened them again. I broke down. I couldn’t believe he was actually gone. I regret not being there for him as much I should have. He was going to be my best man when I got married. We were going to work on some projects together. The Good Lord called him home instead. I miss him greatly. One thing I can never take away from him was his gifts…in music and in basketball.