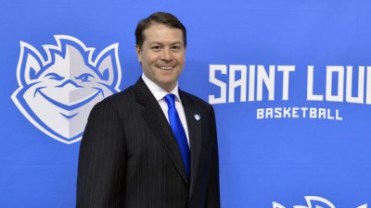 St.Louis University ended their search for a head coach and hired recently dispatched Travis Ford. Ford time ran out while coaching at the University of Oklahoma State for eight seasons. I like the hire of Travis Ford for several reasons. One is he is very familiar with the territory in the region. The Kentucky native started his collegiate career playing for then former Missouri Tigers head coach Norm Stewart for only one season. The 5-foot-9 Ford won Big Eight Freshman of the Year and looked like he was going to be a fixture in the Tigers lineup, but he transferred to his home state school the Kentucky Wildcats. He sat out a year and closed out his collegiate career with back to back SEC Tournament MVP awards. Another reason I think this is a good hire for Saint Louis University is that he knows the Atlantic-10 Conference very well posting a 62-35 record while coaching at UMass for three seasons, which led to him accepting the same position as head coach for the Oklahoma State Cowboys in the Big-12.

Now even though I like the hire doesn’t mean that there aren’t any concerns. While he coached at Oklahoma State his non-conference record was not a pretty sight. He went 55-65 and only once won more than 10 games in a conference. And that one time when he did have over 10 victories his team just unraveled in that 2012-13 season that featured now Boston Celtics point guard Marcus Smart and a very athletic Markel Brown who posterized the Missouri Tigers before they exited the Big-12 and landed in the SEC conference.

The hire of Travis Ford is a big upgrade from now fired coach Jim Crews. It was very painful to watch SLU play basketball under Crews. There is no real description of what of what they were trying to get accomplished on offense. You couldn’t even say they were vanilla on offense, because even vanilla has a flavor. This team labored in half court sets and often looked confused or fearful of taking uncontested shots. No defensive intensity, nothing in transition, and a slam dunk was as common as a Bigfoot sighting. There are plenty of athletes already on the team roster presently, they just need to be coached up better. And I’m interested to see how the adjustment period will be for not just Ford, but for the remaining players and newcomers to the program.

And it sure didn’t take long for some in the St.Louis media to say that he needs to recruit. Really? All coaches have to recruit and that’s something that Ford has. He has that proof of performance when it comes to recruiting. He managed to land some major recruits at his most recent job. I have no doubt that he’ll be able to recruit at SLU, but for the meantime he is what these players need. Plus you have to always keep in mind that sometimes as a coach you can stay at a place to long and the message start getting stale.

The Saint Louis Billikens instantly became more competitive with this hire and the timing of the hire was perfect for SLU. Because, had the Missouri Tigers dispatched Kim Anderson, Ford would’ve made a good fit there for the same reason why I feel he was the right hire in this case. Now SLU have themselves a head coach and the spirit is renewed about the possibility of the program returning to respectability and being taken serious instead of being looked at in such a condescending manner. Maybe even carry the mantle as the top college program in the state of Missouri for the first time since bread was sliced. Especially, with the direction of where NCAA men’s basketball is heading with the rise of Mid-Major schools versus the larger programs with one and done players. Travis Ford needed to have a reboot. And SLU needed a reboot. We’ll see how they start walking in those boots this fall. For more sports, follow me @thelegendkil and @NTheZoneShow.

Even though it wasn’t the biggest shock of that night…it still is worthy to note that two Missouri players were drafted in Thursday night’s NBA Draft. BIG UPS to guards Kim English and Marcus Denmon, as both were selected in the second round. English was chosen as the 44th pick by the Detroit Pistons. Denmon was chosen 59th by the San Antonio Spurs.

English should be a good fit for the Pistons, I think he can be a great role player turned to an eventual starter. Remembering how he came off terrible in his junior season, he (for the most part) redeemed himself in his senior season averaging close to 15 points/game and knocking down 46% of his 3-point shots. If he is able to create his own shot, he will have a great future in this league, even if it doesn’t work out in Detroit. The last Mizzou player to be selected by Detroit was Rickey Paulding back in 2004 when Paulding was selected 54th by the Pistons.

Denmon, on the other hand could be like Ben Gordon of the Charlotte Bobcats. The former 1st teamer of the Big 12, averaged close to 18 points and 5 rebounds a night for Mizzou in his senior season. It may be tougher for Denmon to make the squad as San Antonio that’s crowded with shooters like Stephen Jackson, Danny Green, Gary Neal, Matt Bonner and super reserve Manu GINOBLI!!!!!!!!!!!!!! (In my Charles Barkley voice).

My hope is that both Mizzou players can make their respective rosters and be dynamic players in the NBA. 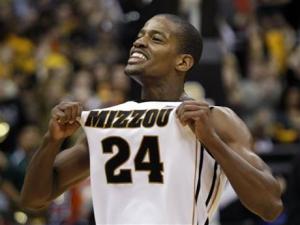