Time for another edition of N The Zone REPLAYING THE HITS! We take you back to Season 3 when Rory Karpf (@RoryKarpf), award-winning filmmaker and director joined N The Zone to talk about his work with the “30 For 30” Ric Flair documentary along with dismissing the notion that the same old story was given on Flair, along with being a fan of the wrestling genre. The guys also talk to him about his work with ESPN and how he developed a relationship with them, what was his best film that he has worked on, along with how he got connected with rapper Snoop Dogg. Plus touching base on the “I Hate Christian Laettner” documentary, how that came to fruition and what new projects he has in store for the future.

No. This is not an April Fools joke.

The Livn Legend returns with another edition of “The Monologue.” This time talking new season of the St. Louis Cardinals and does NOT go after Mike Matheny. WHAT? So he turned his attention to a conversation he had with a friend about race in the city of St. Louis. Then he turned his attention to a time last year where THIS show was going to partner with another podcast network, and how it was dissed by the network’s founder in the direction it would go. The Livn Legend unleashed. NOTE: The following contains language that some might find objectionable. Parental discretion is advised.

The Livn Legend’s daughter Autumn Marie joins the show to give the first edition of “The WWE Diva Report.” She gives insight on the latest on the WWE Women’s division leading up to Wrestlemania…along with a major hot take on a highly publicized (yet unscheduled) match between John Cena and The Undertaker. City to city, state to state, worldwide! We’re bringing the youth to N The Zone! The following segment is sponsored by Our Lady of Perpetual Health.

As always, we’re going city to city, state to state, worldwide! It’s not a podcast, THIS. IS. THE NETWORK!

Vince McMahon knows how to get the attention.

The chairman of the WWE couldn’t have picked a better week to get the national attention in sports.

There was RAW’s 25th anniversary show on Monday night that featured great memories and nostalgic moments. (Aside from the following Tuesday’s Smackdown and Wednesday’s NXT events) Not to mention having the anniversary show in not one, but TWO venues with the Barclays Center and the original home of “Monday Night RAW,” the Manhattan Center. The eyes were on Vince.

Then on Thursday afternoon, the long-awaited announcement from Vince on the return of the XFL, or as I previously stated, “The Rebirth.” Maybe it wasn’t that long (it was made in November), but it damn sure felt that way. Again Vince had the eyes for that one because pro football is a little vulnerable right now with the fallout of politics being entered into the game. Vince gave a basic overview on what to look forward to in the new league. NO GIMMICKS, NO POLITICS, JUST FOOTBALL. Again, the eyes were on Vince.

Then last night, WWE began another weekend of action with its brand NXT and its “Takeover” in Philadelphia. 5 stellar matches including the brand’s top championship match in which the champion Andrade “Cien” Almas retained against challenger Johnny Gargano. I must say that was one helluva match. It entertained from the start of the match to the end of it. I have watched a couple of these NXT pay-per-views and each time I enjoyed it. I need to start watching more of the brand. Again, eyes were on Vince.

Then Sunday night, WWE capped it off in Philadelphia with the 2018 Royal Rumble with a history-in-the-making match. For the 1st time, a Rumble had 30 women compete and one of them (Asuka was the winner) will get the opportunity for a Women’s Title shot at Wrestlemania in April. Along with 8 other matches, that included the Men’s Royal Rumble match (Shinsuke Nakamura won and announced that he would fight AJ Styles for the WWE Championship at Wrestlemania)…once again the eyes were on Vince.

NOW, I understand that the Grammys took place at the same time but that did not stop Vince from banking in on the ones that truly watch his promotion. Especially when his promotion grabbed MAJOR news headlines when UFC fighter Ronda Rousey showed up at the end of the Royal Rumble pay-per-view which then prompted “The Worldwide Leader In Sports” to announce that she had signed with Vince’s promotion and participate full-time.

Vince couldn’t have planned this past week any better.

NOTE: If you read this and notice that I have used McMahon’s first name, it’s only for the sake of this piece. 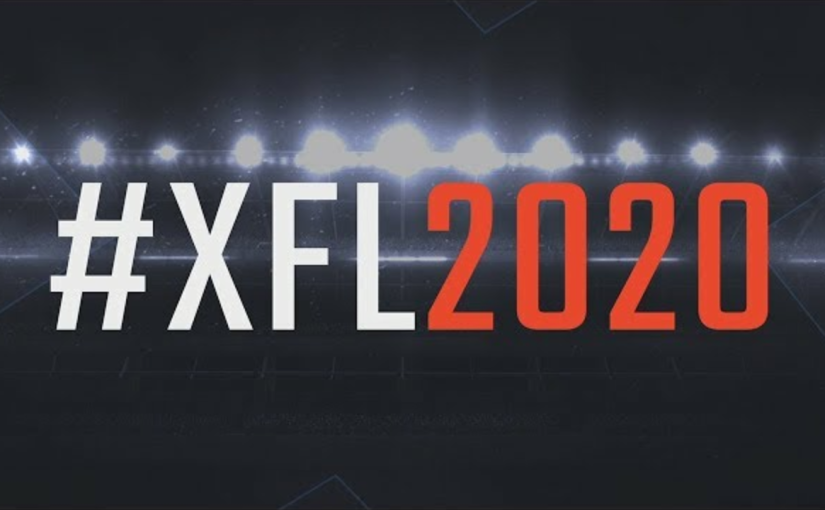 What does these numbers equate to?

It’s the rebirth of the XFL.

Yes, folks. It’s coming back. And this time it looks completely legit. At least that is what it looked like from the formal press conference that Vince McMahon put out at Thursday afternoon at 3pm Eastern standard time. My interests for the revival, or reboot, have truly piqued.

Now, I don’t know who the teams are, or where they will play, or who’s going to be in it. Because it’s really starting from scratch. With this formal announcement, this is going to be a different product from the one that McMahon put out in 2001.

I must say, McMahon is really going for the “fan approach.” He wants to hear the thoughts and ideas from the fans so the league can prosper.

I happened to watch the presser and he dismissed that there will be no WWE crossovers. XFL 2 and WWE are separate entities and will not coexist. So no Jim Ross, which really stinks, because he loves football and he can announce a football game like he did with XFL 1 back in ‘01. None of your favorite wrestlers, past or present. NO WWE in this rebirth. McMahon also said that he won’t even be the frontman for the league, which gives indication that will be a new face this time running the show. McMahon is the founder but will be behind the scenes. That’s a plus. Because back in 2001, he looked like he didn’t know what he was doing and the product was rushed.

McMahon also said that politics will NOT be in this league and that players WILL stand for the anthem. Along with, former players that have had criminal records can NOT play in XFL 2. I found that to be extreme, maybe a zero tolerance policy and give players a second chance, but those are his rules and regulations. He wants a clean-cut league. He also did not mention anything about being a competitor to the NFL.

As of now, no media outlets have been announced, but McMahon said that some outlets have taken interest in the new league. That’s a given. He gave the year 2020 because he believes that it will take 2 years to get everything needed for it.

What got me is that when the announcement was made in November 2017 (Brad Shepard was the first who broke the story), he had put down $100 million (round or about) into this new league (the entity is Alpha Entertainment, LLC) and just let the rumors fly. He also got the people’s attention significantly. Instantly, abandoned NFL cities began to talk about the potential of a team being located within XFL 2, especially St. Louis. As of now, the city of St. Louis has filed a lawsuit against Stan Kroenke in federal court over relocation. Other cities like San Diego and Oakland (Raiders will be in Las Vegas by the year 2020) will be possibly looked as an XFL city. However, all of the teams will be owned and ran by McMahon because of it being a single-entity league.

I had been looking forward to this day, and honestly, he didn’t disappoint me. He gave generalized answers during his Q&A portion, but it didn’t matter. He looks at it as: No gimmicks, no politics, just football. There will be a lot of questions surrounding the league in the upcoming weeks and months up until 2020. Our team will do our best to cover the angles as best as possible.

In case you missed it, you can check out the official presser at the link below.

Unfortunately there is no NEW episode this week due to some unfortunate circumstances in town. However, we do have a wonderful “BEST OF” show for you. In a matter of speaking this is a Rams-themed episode. Total coincidence when myself and Palmer put this show together. Seriously. I got two monologues from Palmer on the Rams; mostly William Hayes, Jeff Fisher, and former D’Marco Farr. Plus we have two “classic” interviews with former Rams QB Tony Banks and Joe Laurinitis, better known to wrestling fans as Road Warrior Animal, and also the father of former Rams linebacker…James Laurinitis.  Banks talked about being a young QB in the NFL and how hard it was to overcoming certain issues (this was around the time of the RGIII saga) and Laurinitis talked about being the best tag team EVER along with why he and the WWE aren’t the best of friends. Very intriguing interviews for sure.